people often ask me why i even bother to spend time contemplating on an unreachable God.
someone who has no form or aesthetic
i say, i can't put my trust in something so 'concrete' something so 'formulaic'
something too safe & predictable.
something that it all may be fabricated..
i like something like God, because he's unknowing..
he's majestic.
he's mysterious.
and unscrupulous.
he does what he wants, he doesn't have inhibitions or worry about the judgements of other people. he doesn't make rules,
he simply is Just..
he simply is good.
he doesn't always make sense,
because he simply is truth..
and paired with time,
Truth is better when it comes into fruition.
enlighten
ruminate
Posted by s.j. at 12:51 PM No comments:

ive always had a hard time expressing my feelings in words.
at what is too deep-seated and incomprehensible to say, seems to be more and more desecrated coming out of the mouth.
sometimes, it is a struggle, to even know they're there.
after an episode or an occurrence in my life has dramatically passed and left a harsh effect on me feeling completely listless,.. it is absorbed into my body as if my cells became a porous sponge to the memory of it. i never went by the shallow surface of what people's actions were dishing out, ..i always sensed something deeper happening beyond the surface,..and my body knew it. absorbed it.
sometimes even against my will.
not only that, but it seems to take ahold and never leave, until the months somehow break into years. and hopefully fall away between the cracks..
it's like my mind has taken a cinematographic memory. and the faces and occurrences;
things that never were or never will happen again,.. seem to wear on my skin like a stolen kiss. or an emblem of something that has gone too close for comfort and now is temporarily emblazoned on my skin. like an indention after sitting still for too long in a place not meant for comfort.
except, there is only one thing,.. there is no answer to them. there is no ending to the occurrence. it's only things and fragments that were left loosely hanging in a place that resembles "something significant took place here before..but we're not exactly sure why or what".
that's when the vivid dreams come.
one late-night,..after secretly struggling with turmoil and a broken heart that had a hard time mending; the summer had taken its turn for the worst.
i was reading the first pages of the book of Matthew, when i came across this small, simple section where joseph simply had these vivid dreams from God to tell him where to go and to help protect mary and the baby Jesus.
it was also deep warnings and revelations from celestial beings in his dreams that helped warn them of the times they were in and to reveal what they did not know of their current situation.
at that moment, i desperately clung to this. and called out to God..
i asked him to reveal answers i didnt even know. questions that i never could ask, moments that happened to me that haven't seen the light of day for months, sometimes years.
and reveal it to me in the most profound and unusual way.. dreams.
visions. ..songs.
this morning, after a night that seemed almost unreal. i had been struggling with the release of happiness, and for the first time in months, i was able to feel that rush and let go. i had a night where i felt like I was looking into a lost but solid abyss, and was able to stare it in the face and trust that it knew what it had to do. no matter if i had the answers or stepping stone to lead me in the next place, i was okay with this. actually,
i liked it.
i woke around 6:15 am..and immediately had a song from a some band in my gut. it was like i was listening to that song the whole night. me being the person that has a plethora of songs crossing my subconscious all at once, i was confused to why this one was ringing it's bell in me.
i haven't heard it in years.
i even forgot the name.
it seemed to be playing to me thoughout the night, as i woke from a deep sweat and realized my hands were shaking.
..this always happens when it's something significant or im avoiding a piece of truth that will save my life. or at least mental psyche.
ha, be careful what you pray for..
really.
so i immediately got up and searched for the song. at first i avoided the connotations to it and thought it was all a great song. but. as i listened more, the music grew clearer. and the words seemed to reverberate off my skull..
the answers flooded in..like warm waves in a summer ocean.. and i breathed.
it's always an answer that God orcheastrates to me, ..that makes me want to trust him more.
it's like, a good friend who holds back the truth or piece of information, no matter how much you try to beat it out of them. because they know you'd fall apart more than stand tall when it hits your ears at that time, so they wait.
wait till your asleep.
wait till you're not fighting.
wait till your resting,
until they whisper it into your ear,
through the night.
Posted by s.j. at 3:49 PM No comments:

i've become a hermit.
to enjoy the rest of solitude. plus, things that used to excite me before ..they've all dissipated, in a good way.
culminating.
incubating.
maybe im just another one, whose writing is saying the same thing on other people's minds.
ive just learned enough to know, a mind cannot be wasted and tainted with the false expectations of the illusion a raised bar set there by those we ache to gain approval from (prov 29:25).. more importantly, a brilliant and teachable soul cannot be laid at the mercy of those who will only handle it posthumously. it is only a trick mirror reflection when it comes to getting our standards from society that will not last..
i wonder,
..are we all saying the same thing?
Posted by s.j. at 10:44 PM No comments:


i was caught up in a night of late-night reverie. ..actually it was a little more than after midnight, that the magic of something seemed to permeate the air. i drove almost aimlessly but deeply engaged in the moments that seemed to melt into phenomenas. there is something about a glowing light in the midst of darkness that seems to ease the mind. and bring an aqueous resiliency to a dense exterior. i fought the moments of overwhelming capture, and thoughts of inevitable importance came upon my being.
how could people, ...just not see?
Created being..
intrinsic value
the depth of a King. 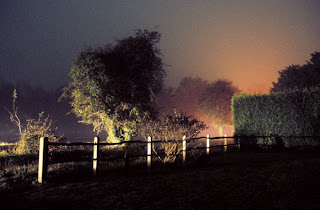